I've been working away at my painting up my previous sculpts and here is one more. I finished sculpting this guy it seems like ages ago, here's the original post. I think he works pretty well as a Victorian worker or criminal or whatever. It might be hard to tell in these pictures but that's suppose to be revolver he's holding. I guess he had a bad shift at the factory or maybe he's on an unexpected adventure. I'd really like to sculpt a few more unarmed civilians to fill in the streets a bit more and give it a little life. Shopkeepers, house wives, some workers, etc...

I kept the palette simple with him and knocked him out pretty quickly. I actually found a picture of some people dressed up in period clothing from a show about people trying to live as 1890's farmers in Snowdonia. I'm guessing the show was a while ago as the website hadn't been updated in a while. I might have to try to track it down I used to enjoy watching that type of show although I'm not entirely sure about the authenticity of some.

In this case the it was nice to see a color picture of common people's clothing instead of just the top hats and tails that most people go for in recreations. I will say the clothing was probably a bit to clean and I'd be interested  in seeing some production pictures from the end of the show after they'd been sweating in them busting sod and quarrying slate.

This is the second Colossus that I painted up for my armies, and once again it was based off of a Privateer Press Warjack. In this case a Cygnar Sentinel that I've had lying around forever. In fact he has appeared in his partial paint job from when he was going to be used for Warmachine several times in pictures on the blog to show off scale.

I decided to finish him up but first I cut away any details that were out of scale, mainly handles and gauges, and ripped off the shield. I tried some different techniques than I normally do to try to make him look more like a 15mm mecha than a 28mm robot. Mainly filters to try to give it a better sense of scale, and careful drybrushing to emulate airbrush techniques. I also tried to keep the weathering in scale as well. I think it came out fairly well but I think next time I might try to make more modifications to the actual model to emphasize the scale first. I have a new plastic Cygnar Charger that I'm going to try out some ideas on.


Also at some point over the past week I reached both 20 followers ( 21 now actually, Welcome Edwin King!) and 2500 hits. I'd like to give my heartfelt thanks to everyone who reads and comments on my blog. I started it as a personal project to keep me motivated but I've been surprised to find it very enjoyable to be part of an online community and for readers to find some interest in what I've done. Thank you Everyone! 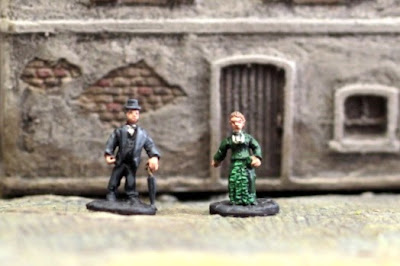 I realized that I never actually put up a post on these two although they were in the background of some pictures previously. Mr. Reginald and Mrs. Amelia Pelham are some of the first 15mm miniatures that I sculpted along with Sherlock Holmes way back a year and a half ago when I started on the Steamworks project. (You can find the original posts here and here.) 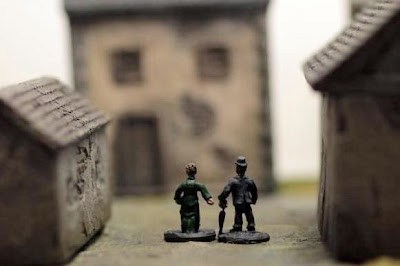 I think she turned out alright although the face is a little weak. Reginald however is the worst of my sculpts. Poor proportions, bad detail work, and a really boring pose. Oh well, he'll look fine tucked away in the back of a crowd and at least I learned from sculpting him.

On other fronts I've done some more test cases with stamping cobblestones. I read on Iain Robinson's blog ( a really nice model railroad blog with some really inspiring pieces of work) how he white glues wet DAS to a cardboard backing to prevent warping and cracking. I tried this technique and it works well, although he uses thin card impregnated with resin to keep it stiff. I didn't and mine has some warpage but I expected that. I also used it to make some base work on washers and I like the end result. I think gluing it to the tiles or plastic card will work out in the future. ﻿﻿﻿﻿
﻿﻿﻿
﻿﻿

Posted by Unknown at 9:06 AM No comments: 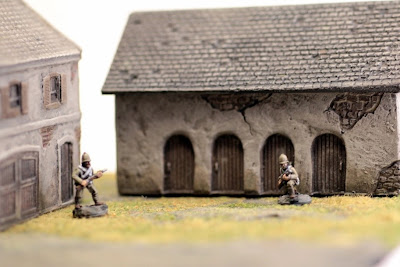 ﻿﻿
I finished up three more buildings for the village. I changed up the colors from the first set a bit so that when they are all together there is a bit of variation. I went with some browner slate for the roofs and more of a grey color to the rendering on the walls. I painted the stone/brick work the same way as before but the mortar ended up a little to bright for me. Not sure how that happened but I put an extra brown wash on it and it looks better now.
﻿

As I mentioned before these are all resins buildings from Crescent Root Studios. They also sell them painted but I opted to paint them myself. I wholly recommend them as they are really nice casts. I understand they are doing some laser cut MDF buildings as well although only in 28mm for now. If they put out some 15mm buildings I'll probably get them as well.

My only reservation has nothing to do with the buildings but the fact that they are really intended for WWII Normandy, or at least they look like they should be in Carentan to me. (On a side note I've been rewatching Band of Brothers so maybe that's influencing me.) I'd like to make some brick and stone buildings without the render on them for a more English look to them. Of course I'm basing all of that purely on my personal perceptions of what period buildings should be. I haven't really been able to turn up much research on whether most common man's homes had render applied to them or not. Although I have found out that the mortar was usually grey as it was made with industrial ash mostly, and I guess the render would probably be similar.

Either way I still have a small home with walled garden, two more outbuildings, and a  large manor house/ inn to go before I worry about making my own. 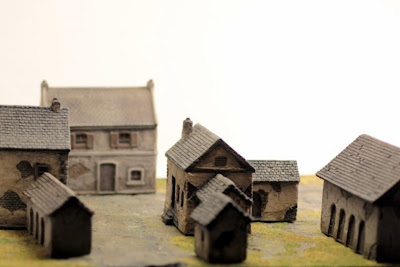 
﻿ ﻿
I've been a little short of hobby time this past week as we had family come in from out of town. However I did manage to start on a couple of things that I will hopefully finish off this week. I also got some time yesterday to paint up on character. From the Highlander Space 1899 character pack he is going to represent a researcher for the Order of St. George, the Victorian British version of the BPRD in the Steamworks universe.
﻿ ﻿﻿﻿﻿﻿﻿﻿﻿﻿ ﻿﻿﻿﻿﻿﻿﻿﻿﻿﻿


Next up finishing a couple more buildings, a robot, and another Shoggoth! Probably not all at the same time.
Posted by Unknown at 9:22 AM 2 comments:

Email ThisBlogThis!Share to TwitterShare to FacebookShare to Pinterest
Labels: 15mm, Painting, The Steamworks

It Takes a Village

I finished up the two buildings and the two smaller outbuildings. They took a little longer than I expected as I was trying out a couple of new things and of course that meant doing a fair amount of repainting. But that is all part of the learning process. 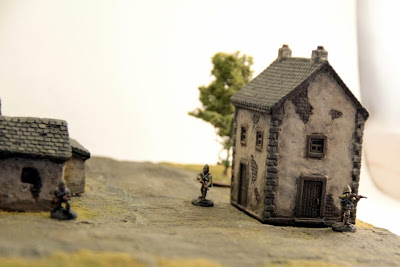 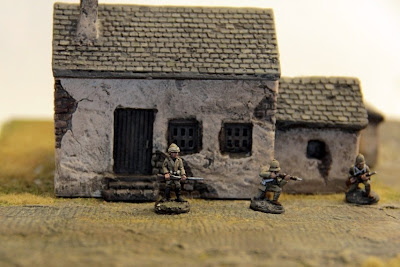 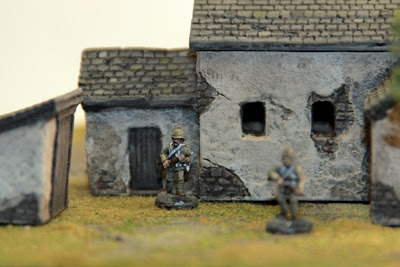 The next ones should be a little quicker, which is good cause I still have a box full of them to do.
Posted by Unknown at 9:40 PM 2 comments: