I was hoping to get this guy done before going away but didn't quite get the time. An intermittently rainy day allowed me to finish him up today though. 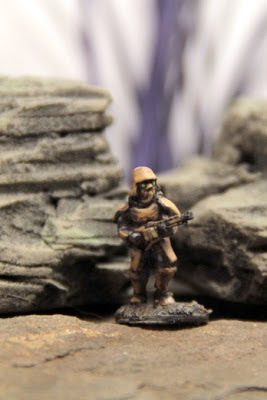 I was torn with Rebel's Titan Marines. I really like their sorta Germans in Space look with the helmets and gasmasks. I might still use some as special troops for SteamWorks, but the indents in the armor made them look a little too much like BMX biker for me. So they get to go into Ark Tangent instead for now.


They got a fairly straightforward paint scheme as they are suppose to represent the standard human tech level. I liked the earthtones of the paintjob up on Rebel's site and stole the flat tone for armor over camo cloth from Dwartist's recent work on the Eisenkern troopers. I think I need a little more practice with the camo as it's a little blobby. 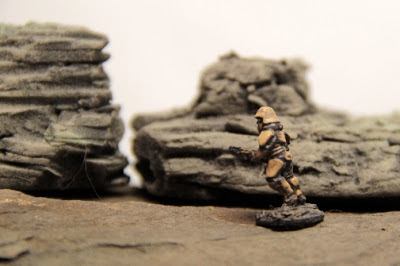 Towards the end of the century worsening conditions due to social unrest, climate change, and lingering fallout from the Eurasian Crisis led many to seek a more controlled life. Praxis Hyper Structures responded by building the first arcologies, massive self contained and self sustaining cities, such as Atlantis City off the east coast of the United States and Shangri-La City in China. Unfortunately for PHS, even as the the first cities were being completed many of the new technologies derived from Traveller research were beginning to alleviate the problems that led to the arcologies construction.

The new cities became playlands for the ultra rich and the company was forced to resort to paying people to live there in order to keep necessary systems staffed and working. The coming of the Ark changed this completley. Now the cities are flooded with refugees seeking safety from the hazardous atmosphere within the enclosed ecology of the cities.

With the retreat of the United World Government to its near orbit facilities and strongholds the arcologies have become city states across the world. Military units left behind have joined up with the police forces of the arcologies to form powerful militaries in the changing lands. It is not uncommon to see heavy mecha and armed platoons patrolling the outskirts of PHS facilities in Praxis Security Force colors.

Posted by Unknown at 5:59 PM No comments:

The Backwater of the Galaxy

All of the alien figures from Rebel are really great. This one is from the character pack from the pangalactic legion. I imagine he's a hardbitten sergeant that's probably seen too much in his time.

I wanted all of my aliens to look rather down on their luck and rough and tumble. I painted him with a simple neutral grey green scheme and then dirtied it up and added a lot of chipping and wear. For contrast I painted the skin a nice purple. 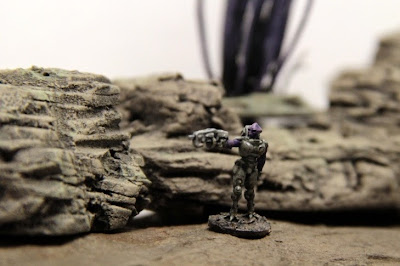 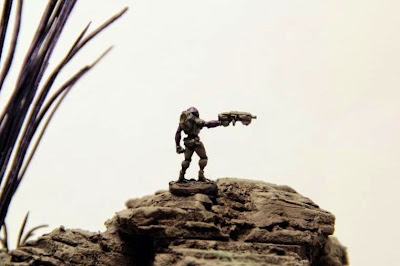 The first ships arrived even as the Ark began to xenoform the Earth. These were not the sleek hyperreal design of the Traveller. Instead they were ramshackle and barely holding together. This was not an invasion force but a pack of scavengers and nomads following along in the hyperspace wake of the Ark.

An entire industry has developed around the Ark as it has travelled through the galactic backwater on the edge of the spiral arm. They harvest the products of the xenoforming process, various exotic compounds, rare materials, and if they are lucky a piece of the Ark itself. Others have come to colonize the new planet. Yet others come to prey upon them.

Never before has the Ark been activated by an outside force, and it has never become quite so active before. For those who follow the Ark this is like a new goldrush and the Earth has become an alien boomtown and just as lawless.
Posted by Unknown at 9:19 AM No comments:

I used the Shalur Mercenaries for the Jovian Collective and then gave them a bone color scheme. Nothing says techno-organic body armor and technology like a nice bone scheme. I really like these sculpts and he was nice and quick to paint up. 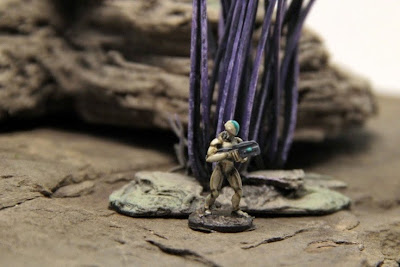 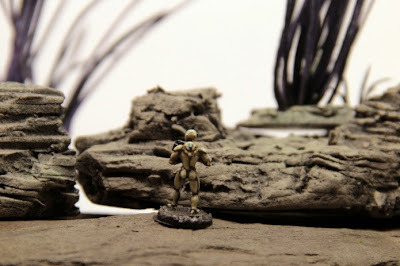 The Jovian Collective was born at the Europan Traveller Research Base. At the turn of the century the discovery of an extraterrestrial spacecraft buried within the ice of Jupiter's moon Europa, dubbed the Traveller, launched a massive research mission. Funded by the newly formed Unified Earth Government and several of the largest corporations the research base was designed to be completely self sustaining in Jupiter's orbit.

After making initial discoveries from the Traveller that revolutionized almost every field of science and engineering, the research staff broke off from the UEG and formed its own nation, the Jovian Collective. The researchers had unlocked alien nanotech technology and used it to make themselves the first TransHuman race. An attempt by the UEG to reclaim the colony was defeated in humiliating fashion and since then the Jovian Collective has kept themselves isolated within Jupiter's reach. However, the coming of the Ark can not be ignored and for the first time the Jovians are returning to Earth.

In a practical sense the Jovians can not die. They have found a way to link their minds to a central repository and can switch their consciousness between special grown bodies. Each body is specialized for a specific task and the synth warrior model used for combat is no exception. Capable of fearsome feats of martial prowess the Jovians show little fear as they know that even if that body is destroyed they will simply download their consciousness into another.
Posted by Unknown at 9:30 AM No comments:

It's been a rather hectic past couple of weeks that culminated with me becoming the new Mr. Lovely Photographer. As you can imagine there was little hobby time available. I'm hoping to get a little bit in this week and be able to put together some posts for when we'll be away the next couple of weeks. If I'm really lucky I'll get enough time to finish off those British infantry too.

I ordered some miniatures from Rebel Miniatures back when their spring sale was going on. I really wanted to get their new steampunk adventurers but I've also been interested in a bunch of the new aliens they are putting out sculpted by PF. I ended up getting two packs of the Shalur Mercenaries, some Titan Marines, and a pack of the legionnaires. I've wanted to work on some stuff that doesn't require a lot of conversion work like all of the steampunk has. I've also wanted to make some terrain that was more wild and free form. So a sci-fi setting would fit the bill perfectly.

I've been pondering what I wanted to do with them as I know there is no chance of me painting them up unless I come up with some sort of story to link them all together and to give me the hook to work on them. I wanted something kinda unique but able to throw just about anything into the setting. My plan is to do small skirmish size forces, so no need for big armies. This is the general outline I'm working with, all of this is subject to change as I proceed.

The year is 2145 and the Earth is in ruins. They said that the Ark would be the saviour of the planet, that they would be able to harness its technology and uplift all of humanity, that finally we would be able to put the Jovians back into their place. They were wrong. The scientists did not control the Ark they only activated it. Now it has begun to carry out its mission: to xenoform the Earth, to remake it for its long dead masters, and with no concern for the current inhabitants. Now humanity lives on the fringes of its own planet, forced to survive in a environment hostile to its inhabitants, hoping for salvation from scattered self contained cities, a handful of orbiting stations and colonies on Luna and Mars. Then following in the wake of the Ark came the scavengers, alien freebooters preying on the planets the Ark has remade, and the technology it used to due so. Meanwhile the Jovians have seen a chance to once again return to the planet they left behind to attempt to harness the same alien nanotech that has allowed them to reshape themselves and build an empire in the orbit of Jupiter.