If there is one thing this project has taught me it's that I have no desire to become a 15 mm roofer. On a 28 mm building cutting the shingles is tedious but putting them on is actually kinda relaxing and fun. Not so at this scale. Each shingle is too small and fiddly for my sausage fingers to easily manipulate. I'm reduced to pushing them around with a sculpting tool and disliking every moment. I would cut them as strips but again they're so small that cutting them like that is going to be pretty horrible.
I think the next thing architectural detail I'm going to do is make up some shingling strips and cast them in resin. Then I can use those to roof any future buildings. A little more work on the front end should save me a lot of work on the back end.


I'm hoping to get the house painted this week and some finished pics up then.
Posted by Unknown at 12:34 PM No comments:

A couple of setbacks with the terrain pieces. Using balsa and pressing the detail in just isn't working for the roofing. I tried a test piece and didn't like the level of detail or definition. I also tried painting it thinking perhaps some dry brushing would help distinguish it. Unfortunately the base coat soaked into the balsa and swelled it up returning it to virtually flat. Now I'm a little worried about the siding. Nonetheless, I'm pressing on.

I've started doing the shingles with thin card. I was trying to avoid it since cutting out the shingles is very time consuming and I've had bad luck with card warping in the past. After completing only one part I realized I'm being a little too slapdash with them. At this scale I need to cut my shingles more uniform in size then I would for a bigger model. Some of the shingles on there would be 3 feet across in real life!
﻿


On the plus side I've been working on this blog for an entire year now. I'm pleasantly surprised I kept it up all this time and the fact that I'm still interested in continuing it as well. What I'm working on has changed dramatically from what I originally intended but that is part of the hobby I suppose. I tend to get obsessed with something but move on pretty quick. So its surprising  that I've more or less been working on one project since Christmas of last year. I guess this whole steam punk enterprise is just the right combination of things to really get its hooks into me!
Posted by Unknown at 11:10 AM 2 comments:

A House in the Country

﻿With some trees done I knew I needed something else to go with them. Trees and to a slightly lesser extent rocks are pretty much scale neutral. Next to a 15mm figure a tree might be a mighty oak but the same tree seen with a 28mm figure looks like a scrubby little maple. So I needed two things to make everything work out.


First is something for my trees to stand on. I like magnetizing the trees since it allows them to both be positioned individually and to minimize the base so it looks like its coming straight out of the ground. The downside is you need to make a board specifically for them with metal built into it. So I made a small board mainly for taking photographs. Its sized to fit in my light box and the plan is to try to scale it to 15mm.

Second I need a house. Buildings are the best thing for showing scale. There is a reason Godzilla is always stomping down main street in downtown Tokyo. I wanted my first building to be nice and simple so I can experiment with building techniques and not get bogged down in the details. I decided on a simple clapboard house with an addition and a little porch. I saw a picture of something similar in an American Civil War era photograph and I'm using that as my guide.
﻿
The basic structure is built out of foam core. I used some of my cast architectural details for the door and windows. I pondered how to do the clapboard siding and decided to use 1/32 balsa wood sheet. I cut it to size and then using a straight edge and a spoon buffer sculpting tool pressed in the board shapes. I glued these on the outside.

I'm thinking the roof is going be done similarly. I'm guessing it would either be shakes or slates in reality so I'm going to try to press the pattern into the balsa wood and see how that turns out.

Posted by Unknown at 6:00 PM No comments:

A Little Bit of Wilderness

Next on my list of projects was to finish off some of the trees that I had started a while ago. This is the first batch done. 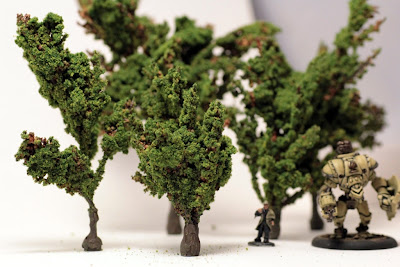 I basically stayed with the method I laid down in the earlier post. After the flock mixture dried and hardened I gave the trunks a quick paint job and drybrushed the leaves with a bit of green. Then I painted on some watered down glue across the leaf areas haphazardly and covered the whole thing with some more flock. This ended up giving it a more unified appearance between the different materials.
They ended up being more work than I first expected. The technique of bulking them out with the flocking works better on the more tightly packed trees. The flock mixture just doesn't stick that well to branches and so multiple layers have to be built up. Also I'd like it if the leaves were more clustered around the outside of trees with more open branches on the interior, more like actual trees. The trunks ended up a little thick for my liking as well. I have a few more to finish up so I'll probably experiment with them some more and then think about improvements for my next section of forest.

So I've been taking a short break from the hobby recently. Mostly a combination of time constraints from work, other commitments, and a vacation and the requisite catching up with life after a vacation.
The time away did give me an opportunity to refocus on what I want to work on though. I have a short list of projects I want to complete and hopefully I'll be able to show each one as I'm done.

Pre-hiatus I was having a hard time getting anything done mostly because I was feeling too lazy to start working. Generally I work while watching TV after dinner which can sometimes be distracting but to be honest it's either then or never. My current plan is to make sure that every time I'm sitting down to watch something (Star Trek: The Original Series Season 3 at the moment) I pick up something to work on. Once I get started it's easier to keep going. It's that initial start that's the most difficult.

In that spirit I was able to finish off this guy. 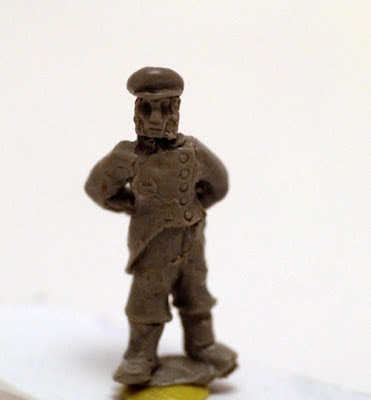 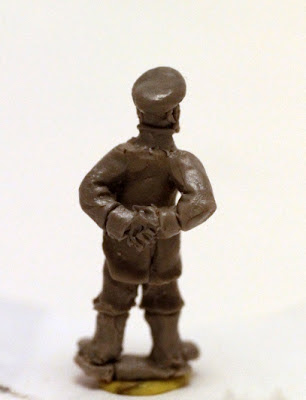 Malcolm Gosswell always dreamed of winning glory in the skies for Queen and Country. But as you get older you learn that glory rarely pays the bills and while the work might not be as exciting as on a Royal Airship of the Line, the pay with the Moss Hutchinson Shipping Company is a damn sight better. Although with air piracy on the rise Captain Gosswell may very well get some of that excitement after all.