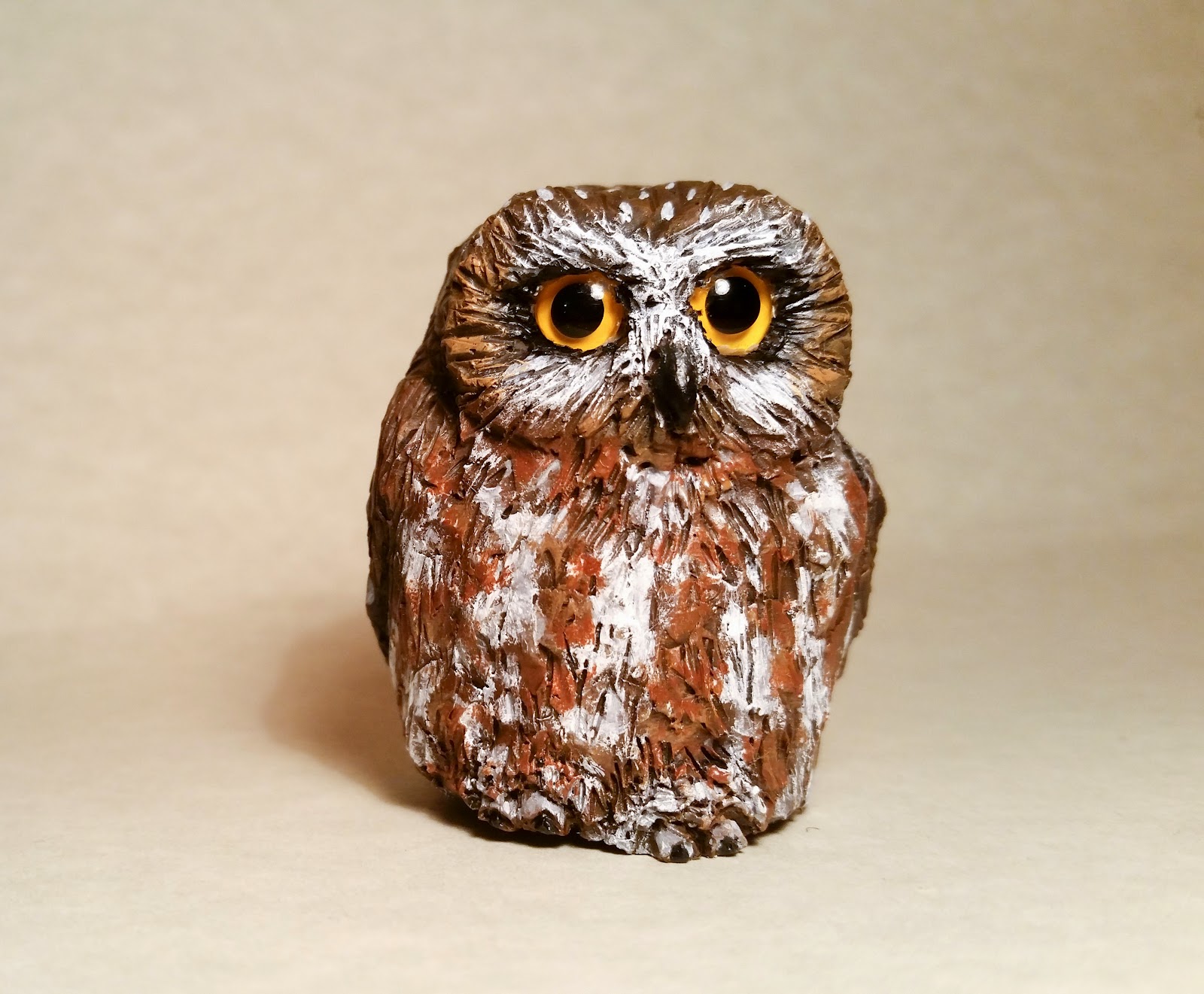 Somehow two of my hobbies have managed to run together. Both my wife and I are birders and also volunteer with a bird rehab organization. Part of the reason for this stems from our love of birds and owls in particular. Last year my wife started a new hobby of needle felting small birds and again in particular owls. She has also started a sideline of selling them on Etsy. ( You can check it out here at Birds By Botzan.) I have helped her out with parts of her projects before, mostly making armatures and constructing feet and beaks for some birds.

Then she asked me to try my hand at sculpting some owls for her after seeing something similar online. I decided to try to use Super Sculpey for this project. I've made some terrain and architectural details with Super Sculpey before but never any real detailed sculpting. I also used premade glass eyes for the sculpts. These are worth their weight in gold for really making the figures come to life. 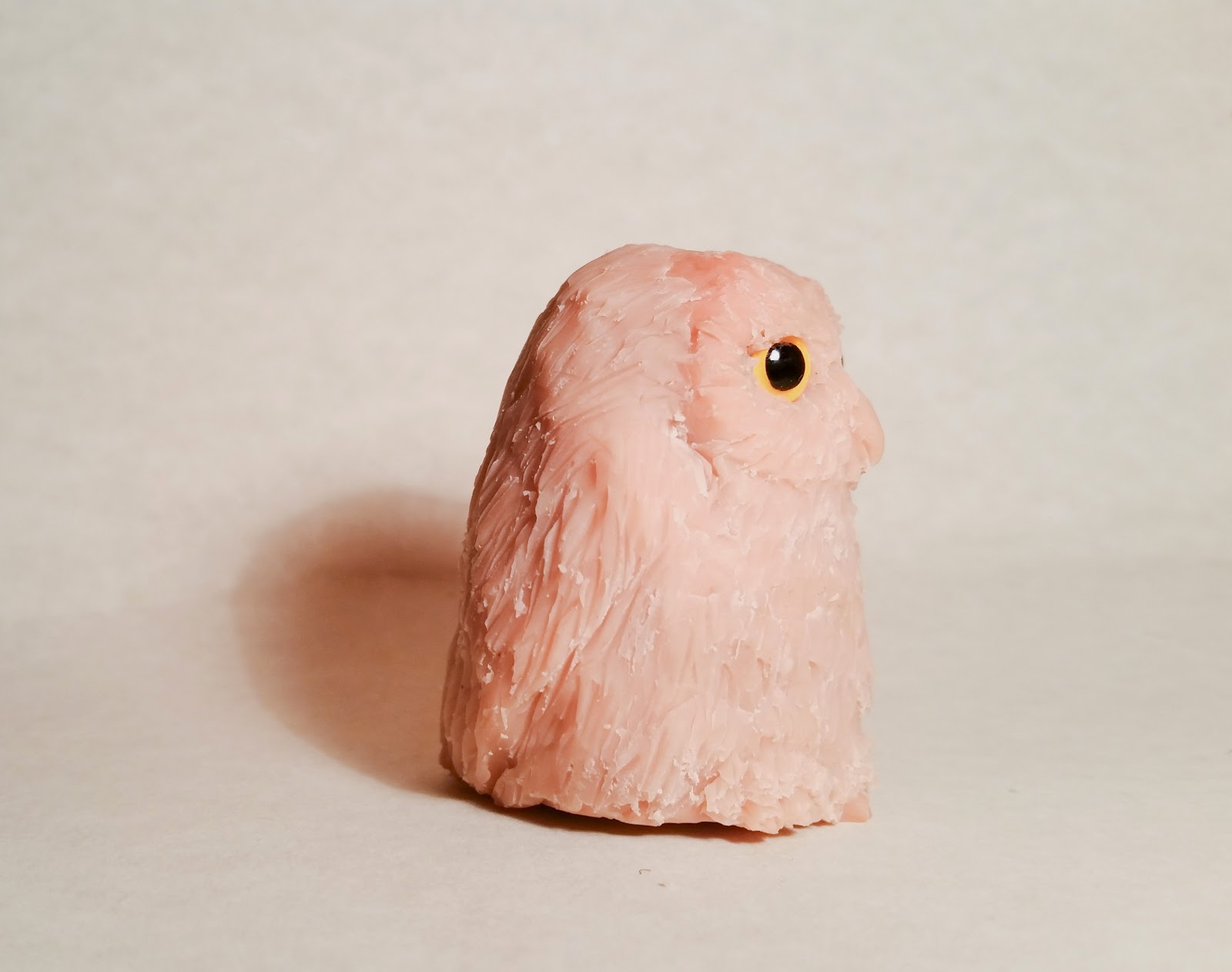 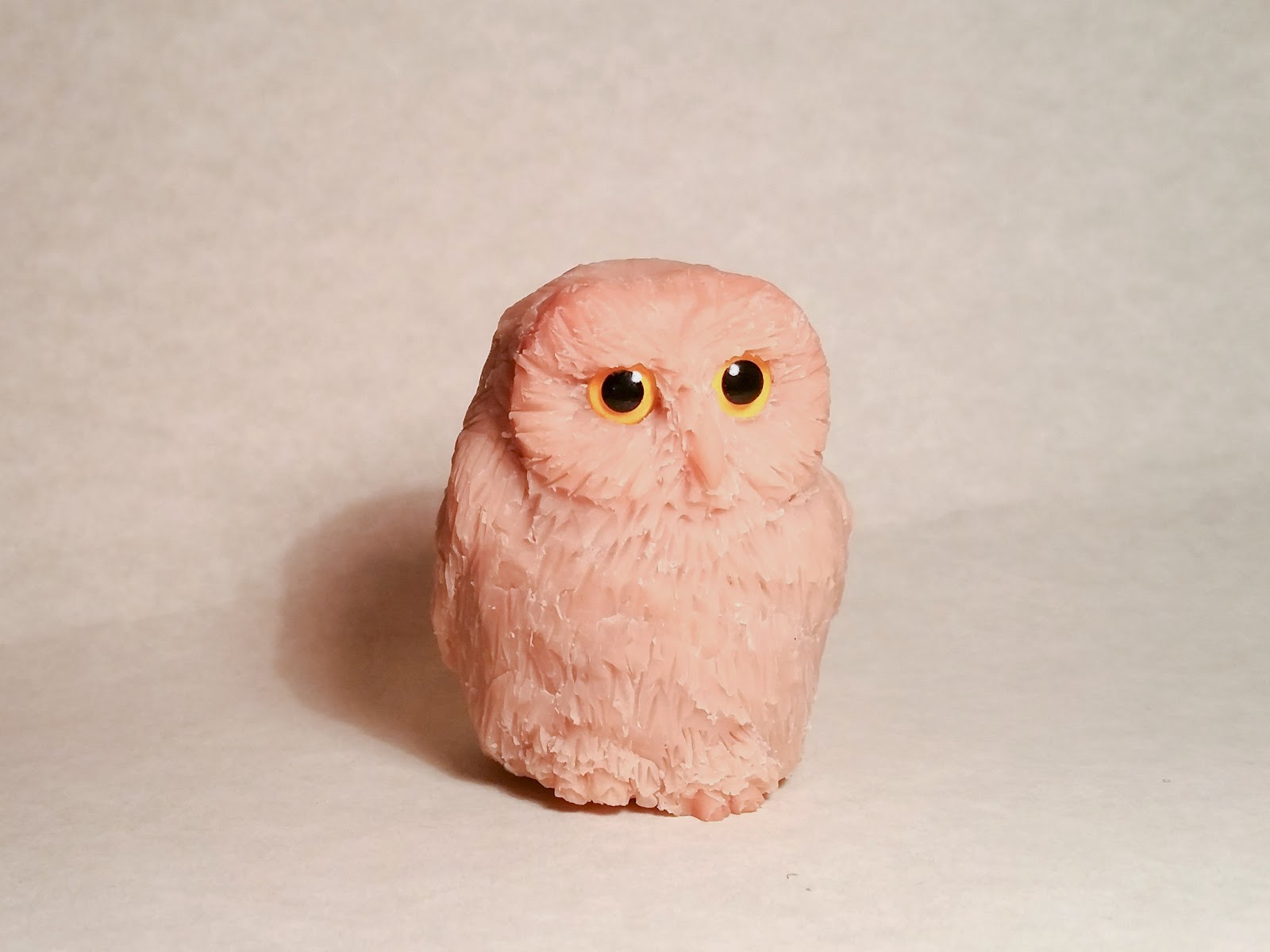 The first one I did was a Saw-Whet Owl based vaguely off a picture I took of one last fall in Canada.
He was basically a learning experience with how to work with the Super Sculpey. After he was baked and hardened I also painted him up. 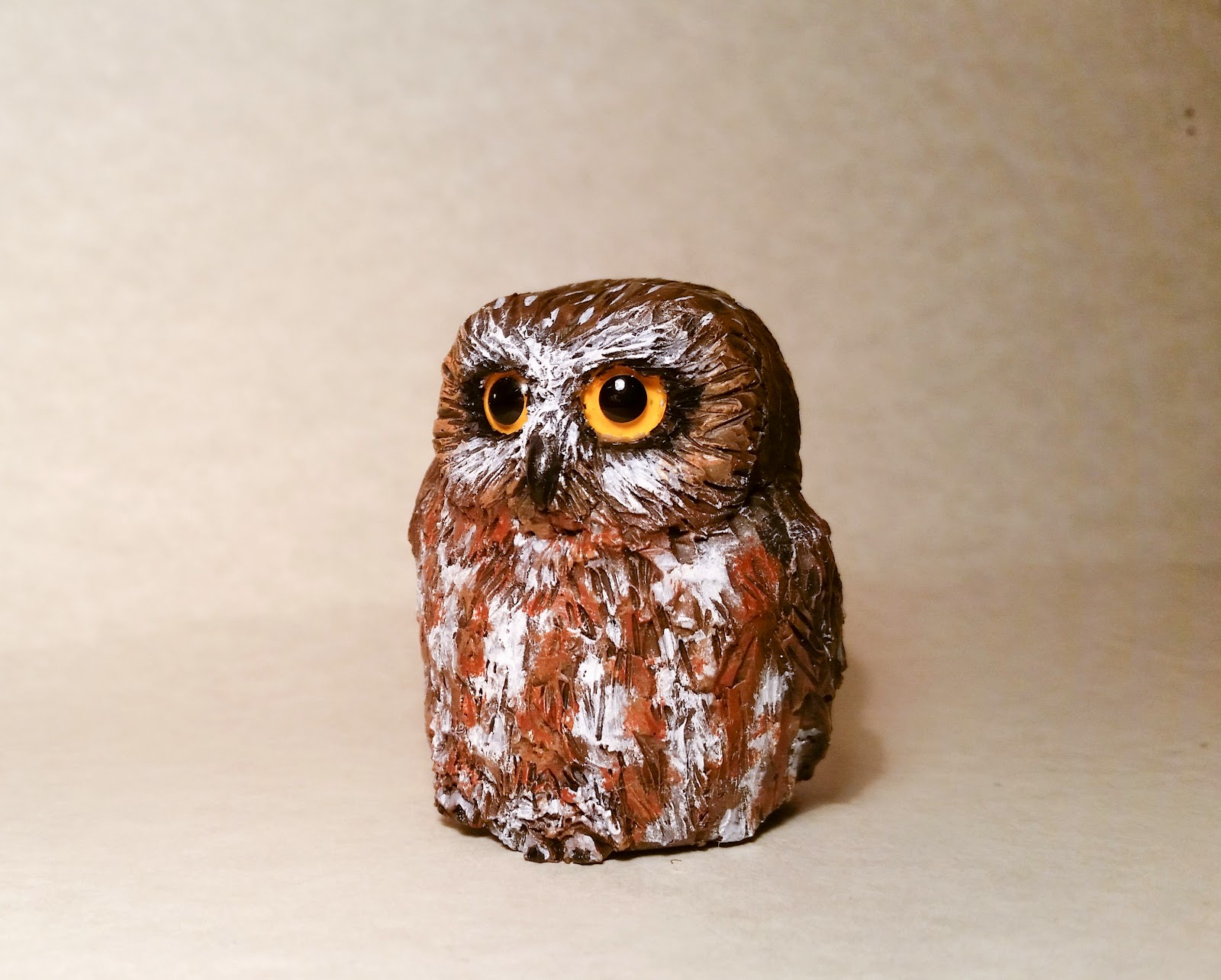 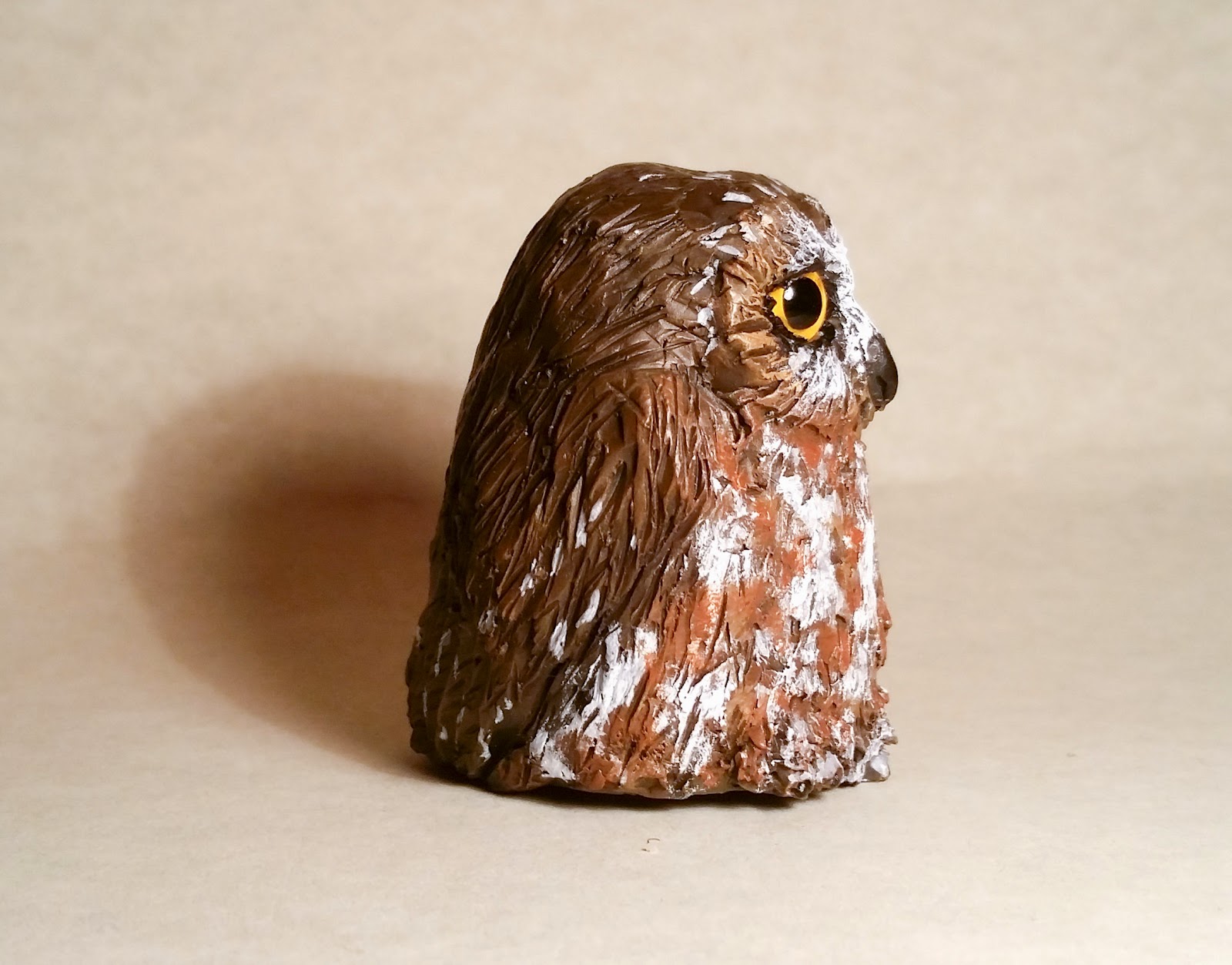 The second is a snowy owl. A while ago we had purchased a pair of books about making wood carvings of owls. These were an invaluable reference as they have tons of excellent drawings and scale references. He still needs to painted but I think he is a big improvement over the first little guy. 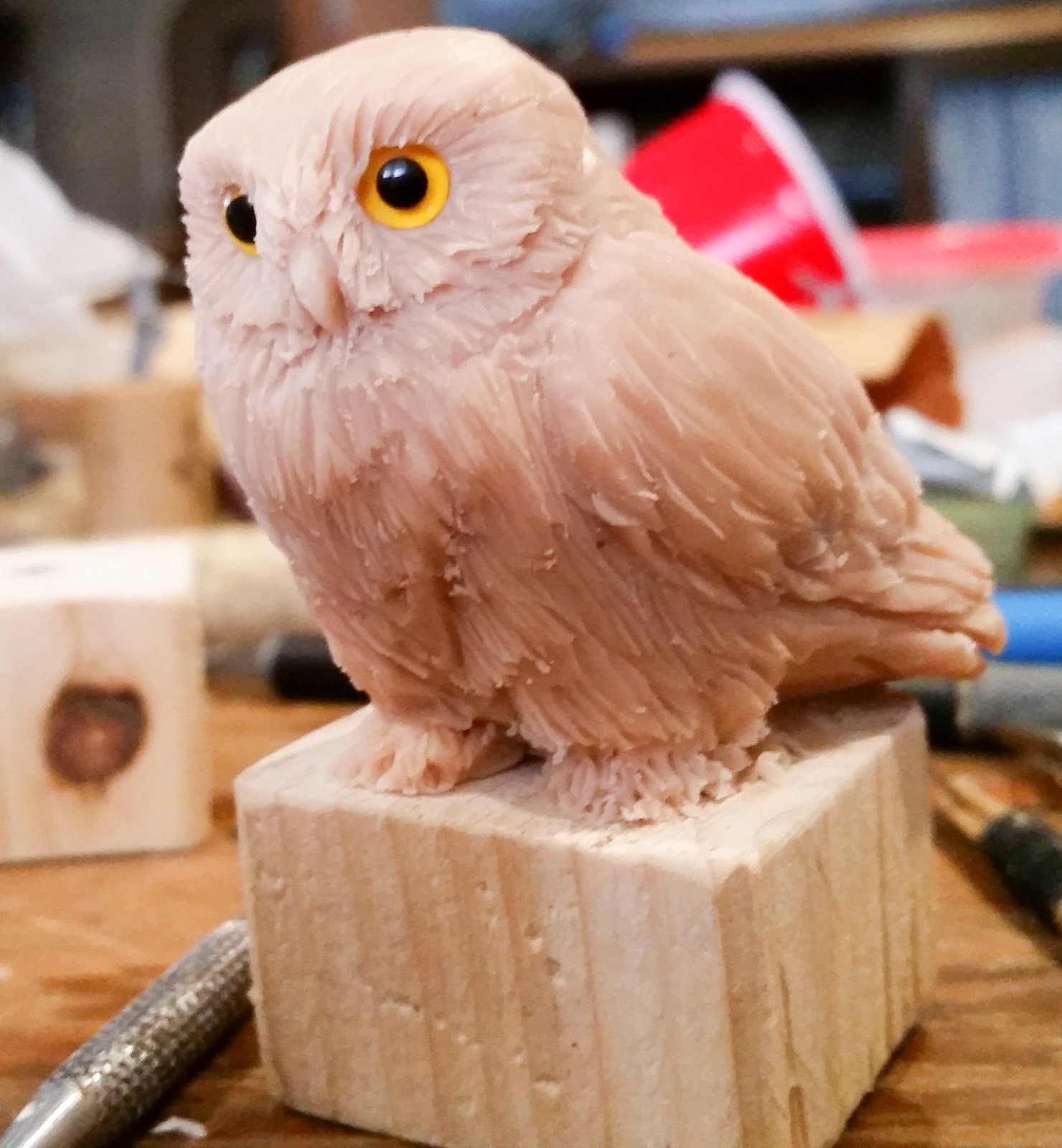 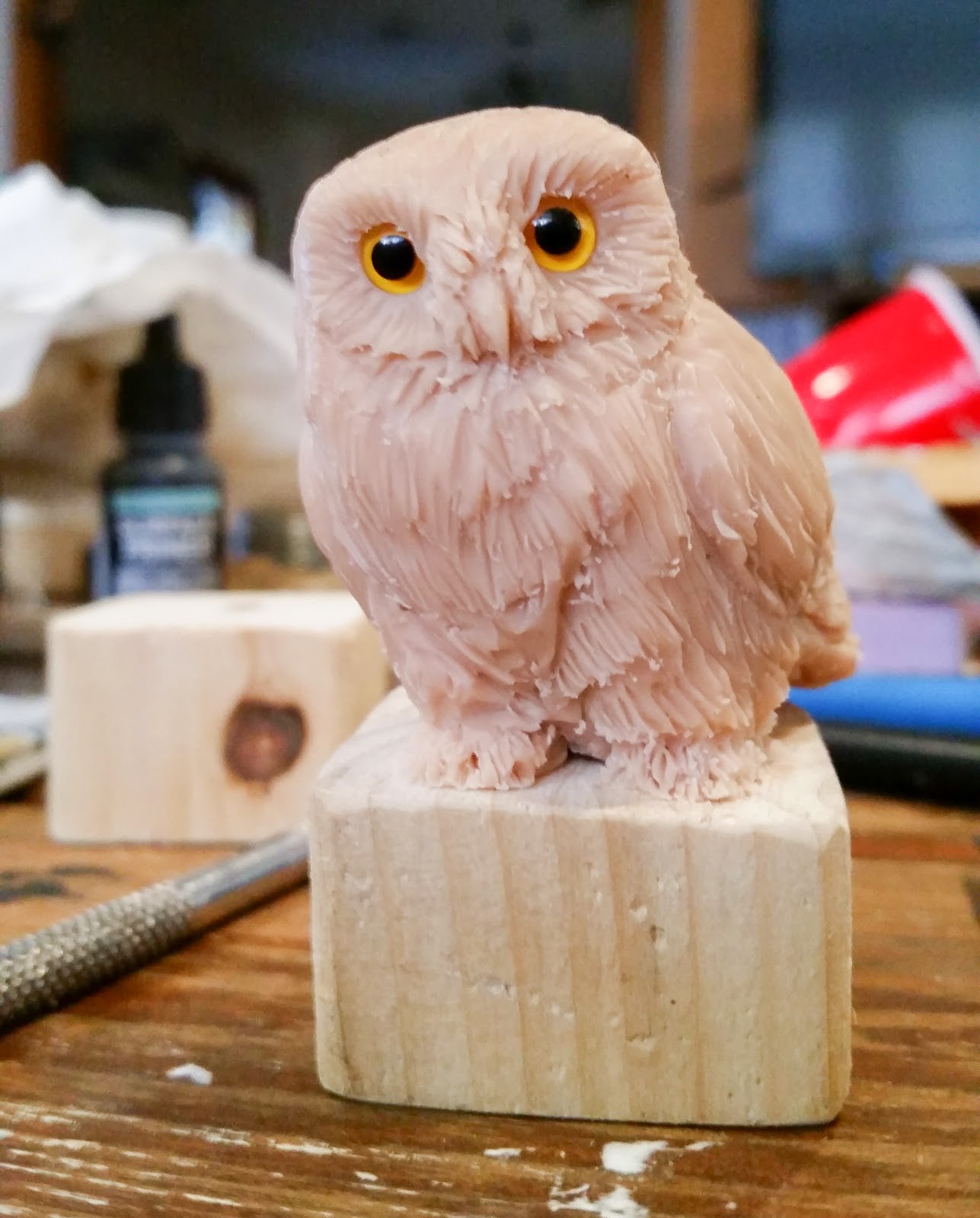 Hardboiled Detective and the Long Goodbye to the Painting Challenge 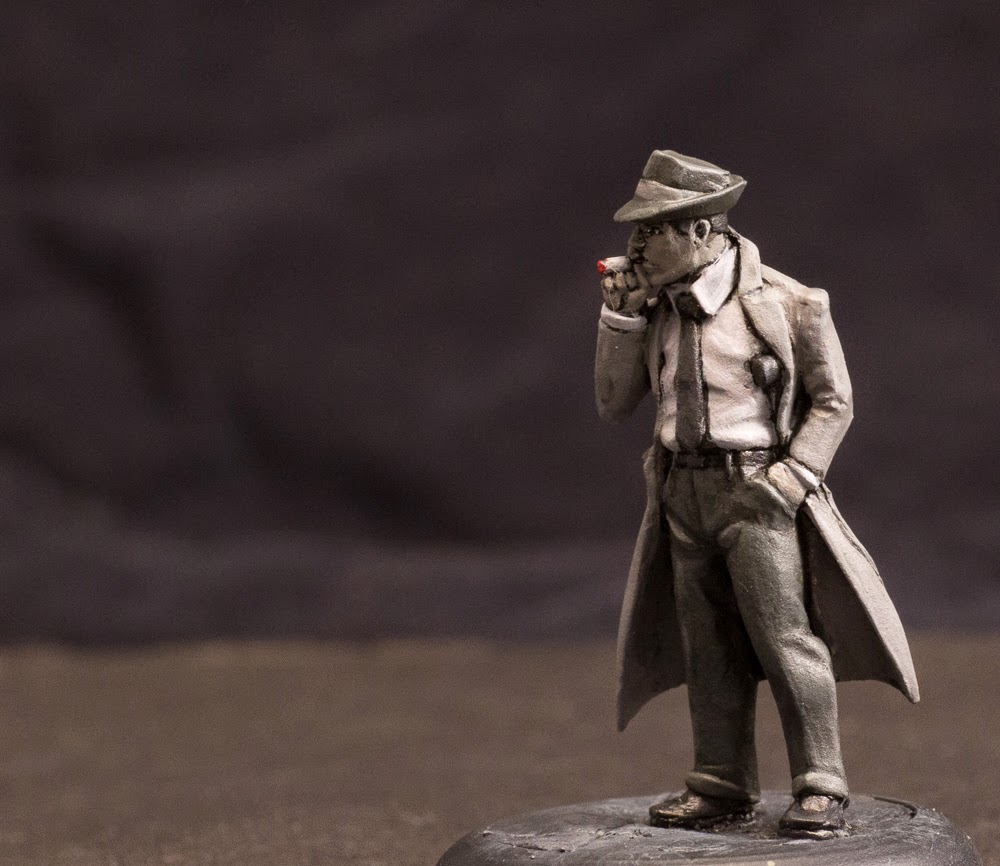 Well the Painting Challenge came to an end on back on Friday and I submitted my last entry just a bit earlier than that. I still needed to paint up an anti-hero to send to Curt as my entry fee. I knew going in that I wanted to do a Film Noir detective and to try to do him in greyscale. I found the perfect miniature in the Reaper chronoscope line and got him ordered in. 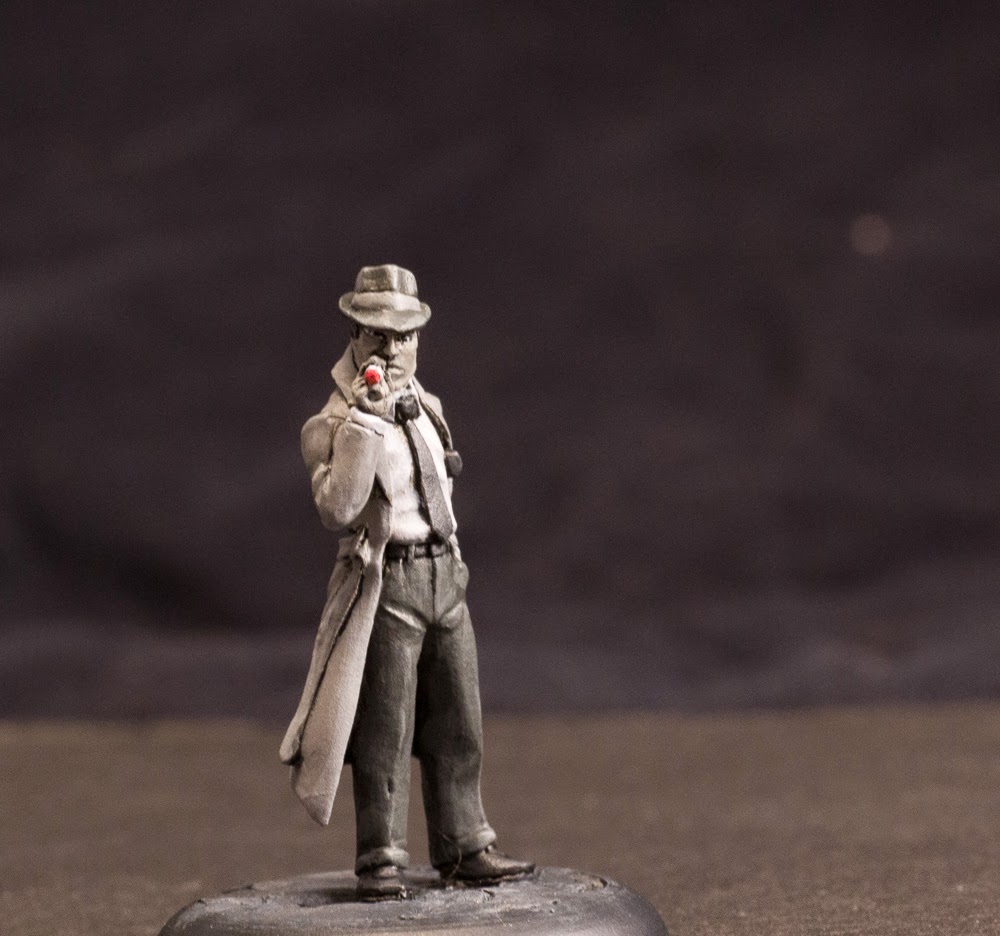 I've never painted a miniature in greyscale before but I thought back to my boyhood art classes that mostly consisted of two tasks; mixing colors to match paint chips and painting still-lives in monochrome. So I broke out all of my greys and off greys and set to work. I tried to keep each piece of clothing in a separate tone to break it apart and give it that look of colors translated to black and white. 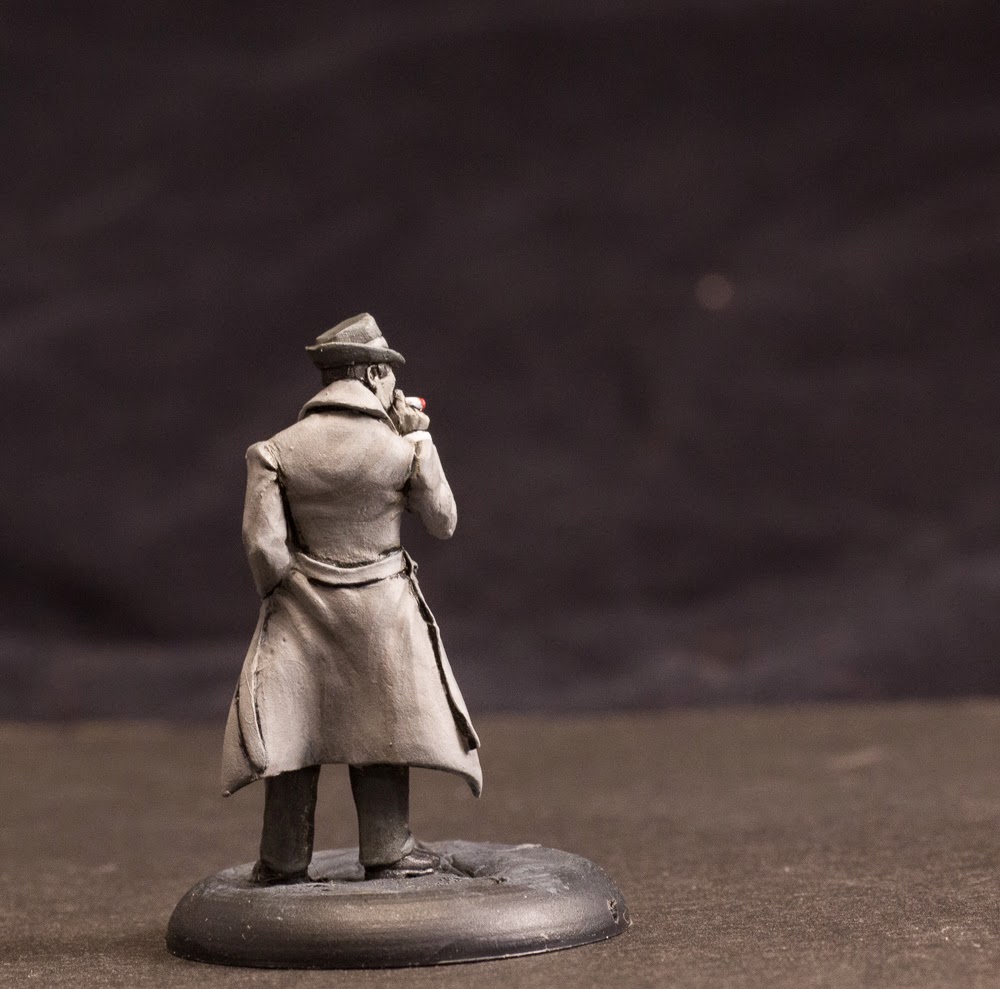 I gave the end of the lit cigarette the only touch of color. From looking at other peoples work it seems like that touch of color is what really sells the grey scale. Plus I think it looks cool.
I'll be trying to ship him out this week. Hopefully the cross border postal system will be kind to him. 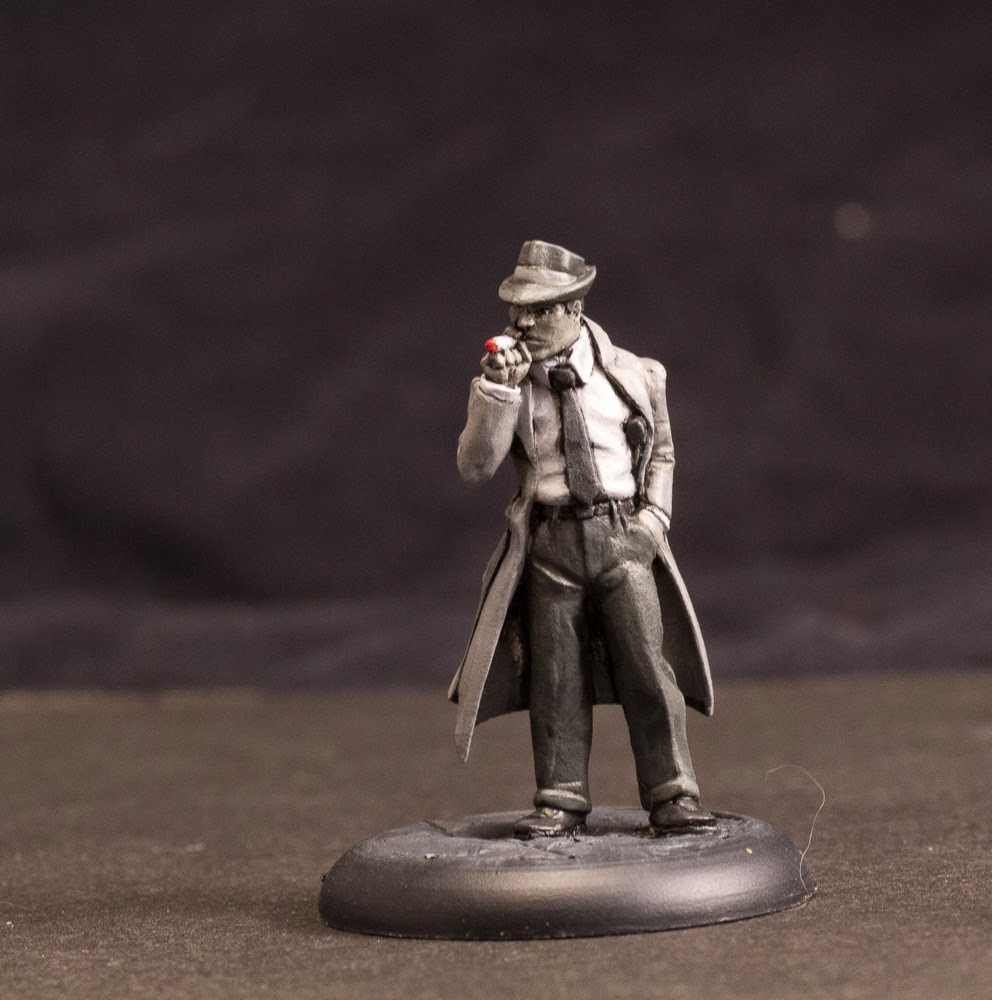 I've really enjoyed my time in the Painting Challenge. Its been the most fun I've had painting in years and a special thanks to Curt and all of the other participants for making it so. I got figures done for several projects that have been sitting idle. As fun as that was I think the highlight for me was the Bonus rounds. I got to work on a few figures that I probably never would have otherwise. I'm particularly happy with the pennyfarthing cyclist that I sculpted. He along with the Uhtred conversion I did each got me a second place finish in the voting. I do regret missing out on two of the rounds however, and hopefully better planning next year will see me in all 6 rounds.

As far as overall production I think the past months of the Challenge have seen me paint more figures than I did in the previous year and possibly two years. 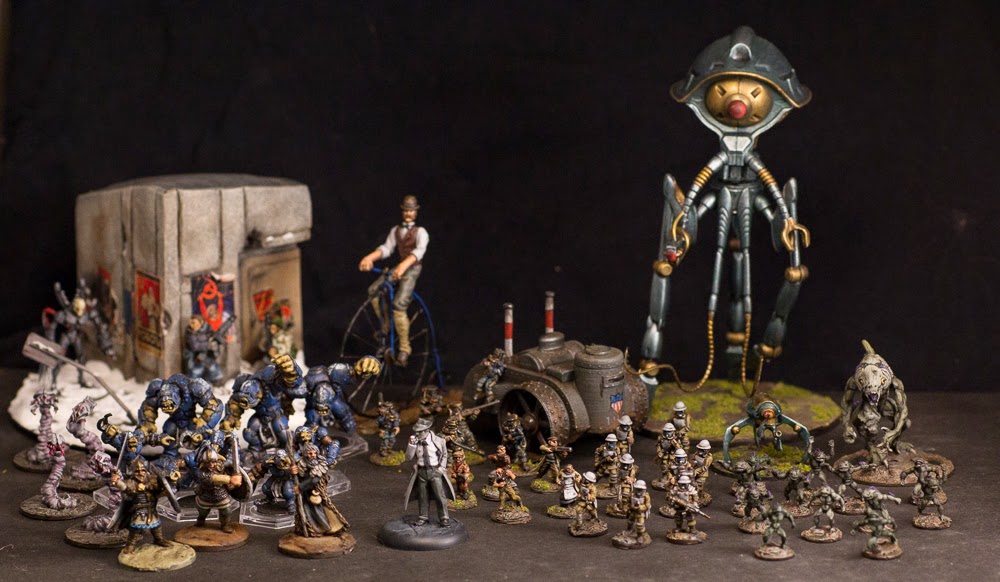 After this I'm going to be taking a bit of break from painting. I actually have a few started miniatures that didn't quite get done for the Challenge so they'll probably be trickling in. But for the most part I'm going to concentrate on sculpting and getting some terrain done. At least that's the plan for now.
Posted by Unknown at 12:00 PM 6 comments:

Bonus Round 6: Uhtred of Bebbanburg 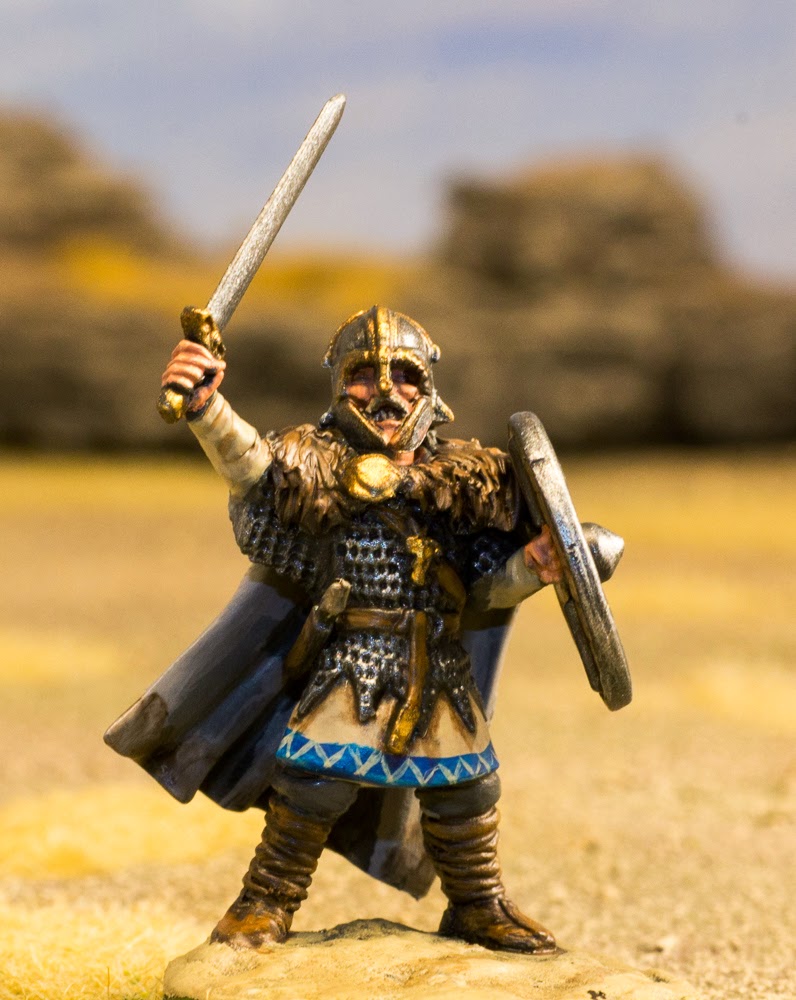 For the final bonus round the theme was Anti-Hero. I actually had a plan for this one laid out a while ago but forgot to get the correct miniature ordered in time. ( When he does arrive this week he'll still get painted up and submitted as my entry fee.) I was left looking around for another option as
I didn't want to miss another bonus entry round. 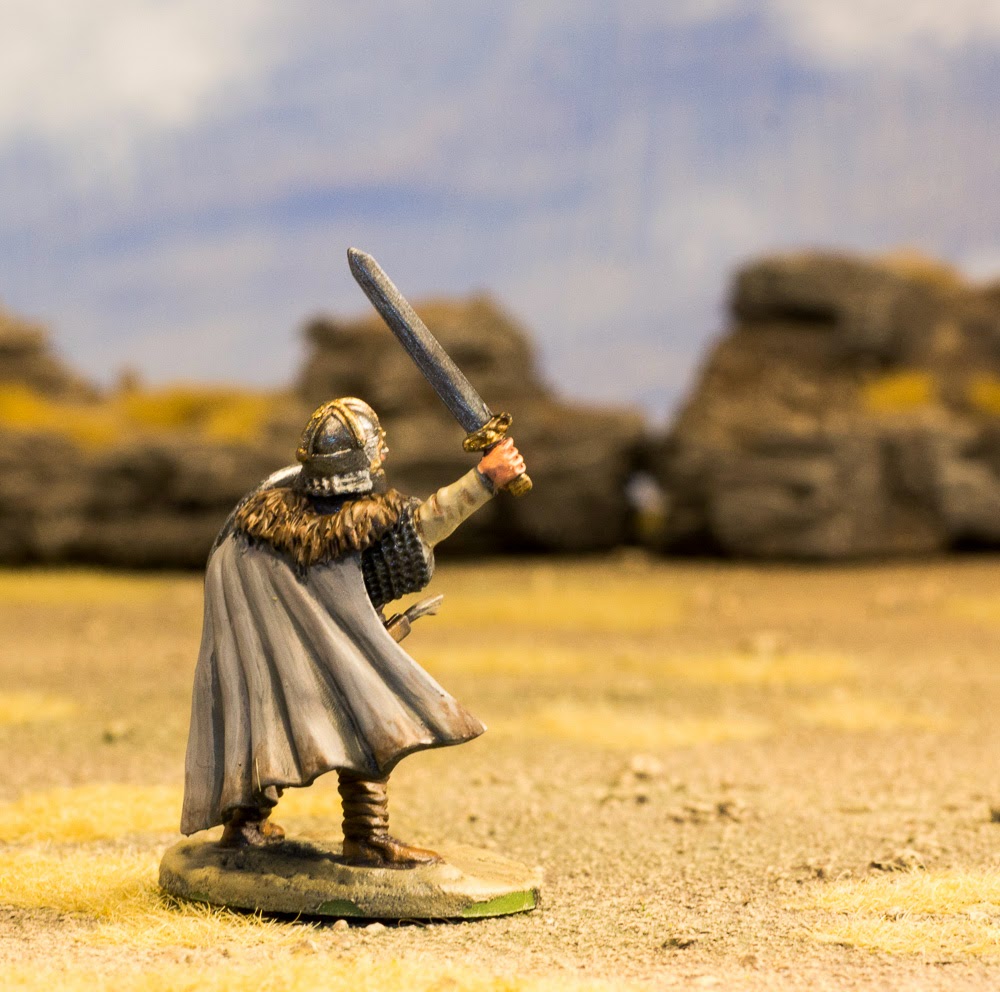 Fortunately I had just read the latest book in the Saxon Stories series by Bernard Cornwell. I still had the command sprue from the plastic Gripping Beast Thegns and figured I could turn the leader into the indomitable Uhtred of Bebbanburg. First up the figure need a couple of modifications. I sculpted some fur onto his cloak to give him a bit more savage appearance and of course changed the prominent cross on his chest to an amulet of Thor. 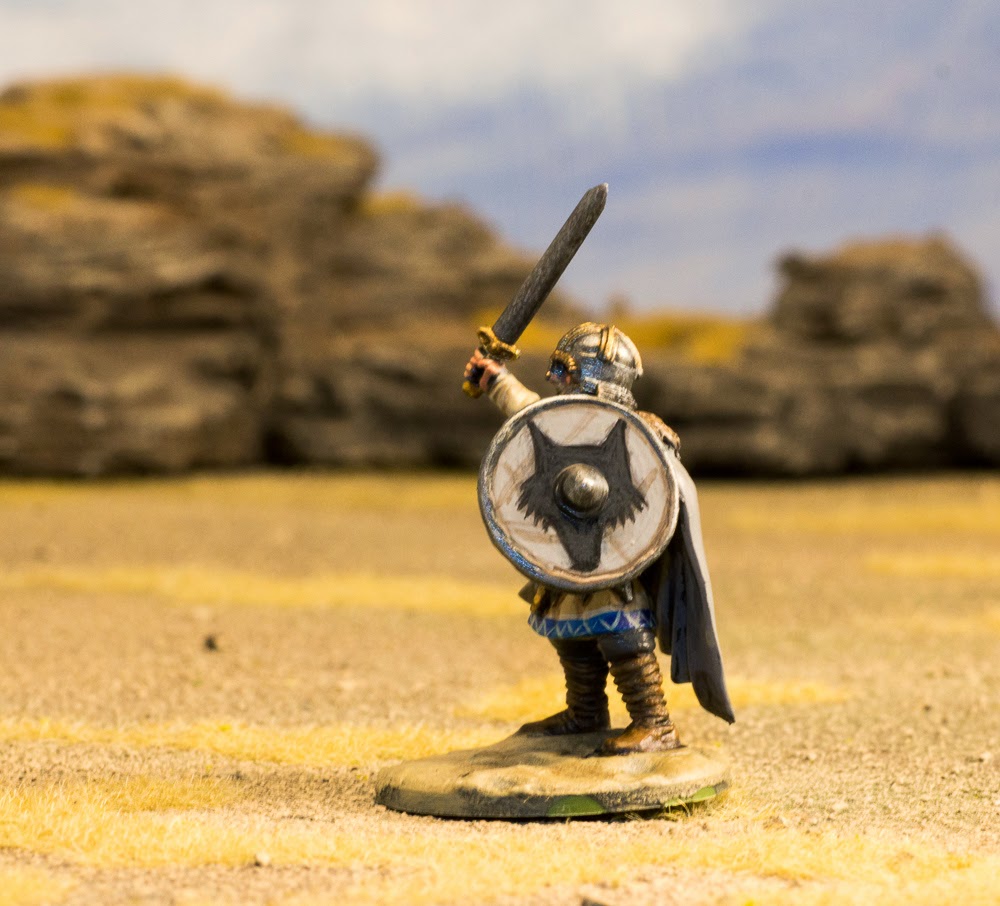 I couldn't remember a good description of colors from the books but I always imagined him in grays and other dull colors so I went with a sea grey for the cloak but gave him a touch of color on the hem of his tunic. I hand painted on a wolf's head for his shield as the traditional heraldry of Bebbanburg and gave him overall a little bit of weathering to give that fresh off the battlefield look. 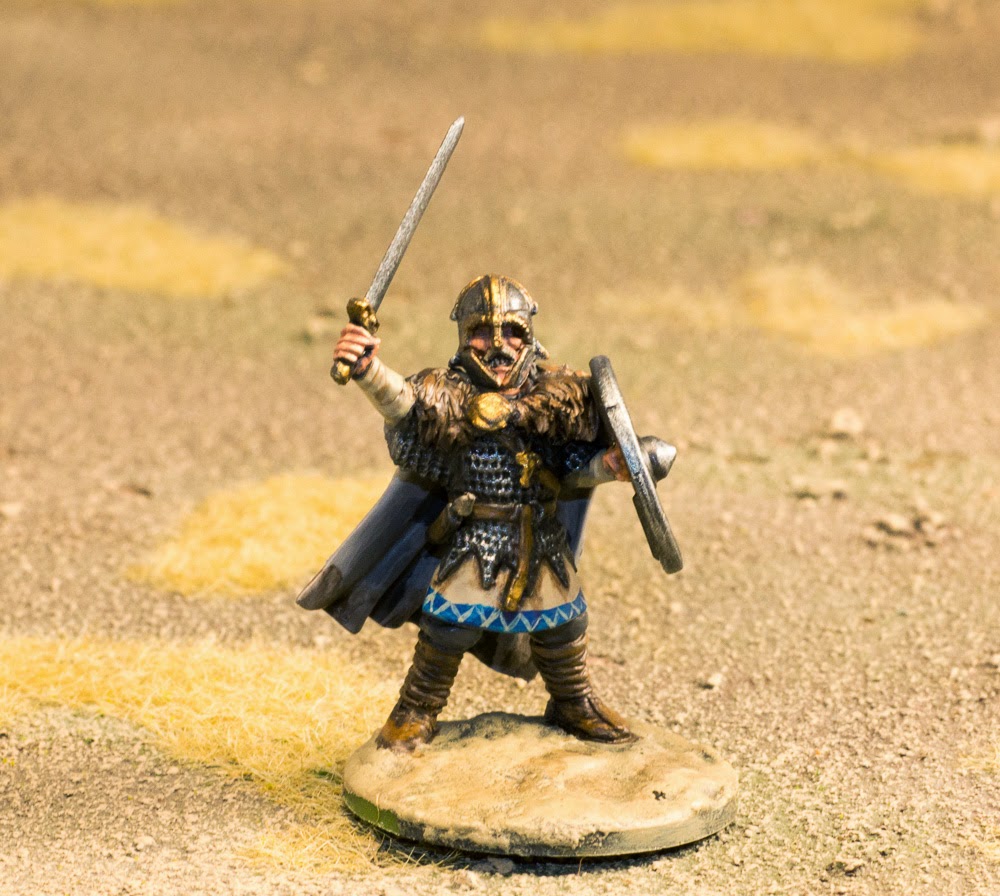 Don't forget to check out all of the entries and vote for your favorites! 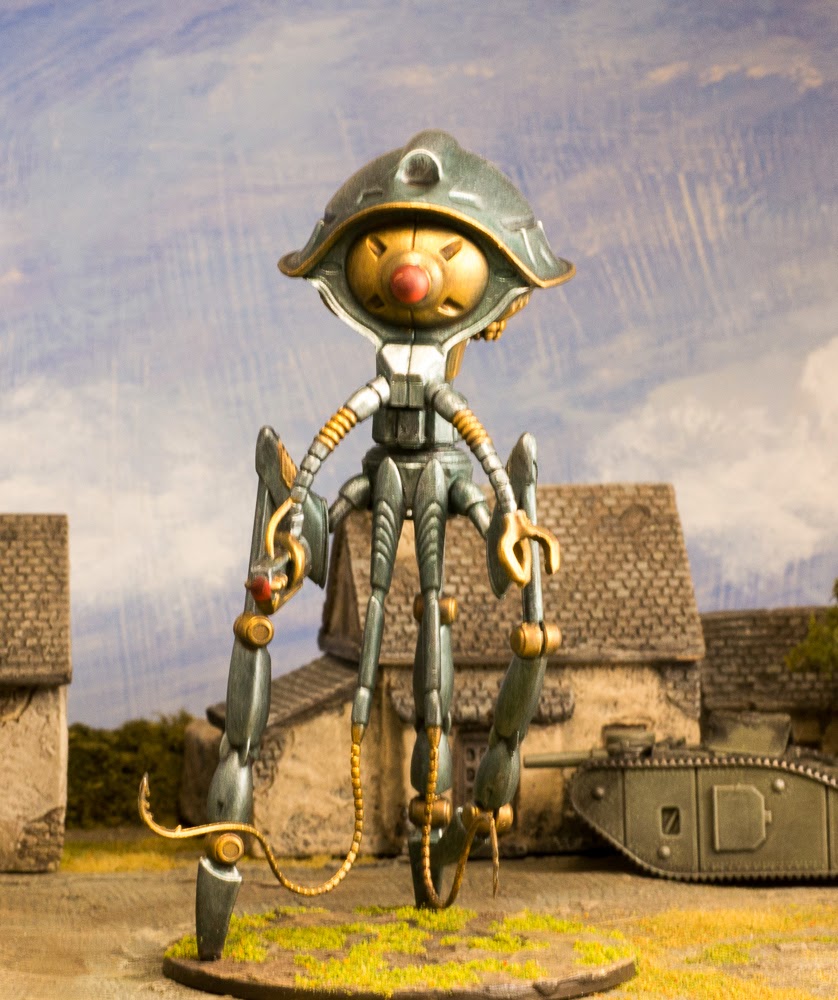 My first full sized Tripod is done for All Quiet on the Martian Front. I think the colors actually work better on the bigger version than they did with the drone. 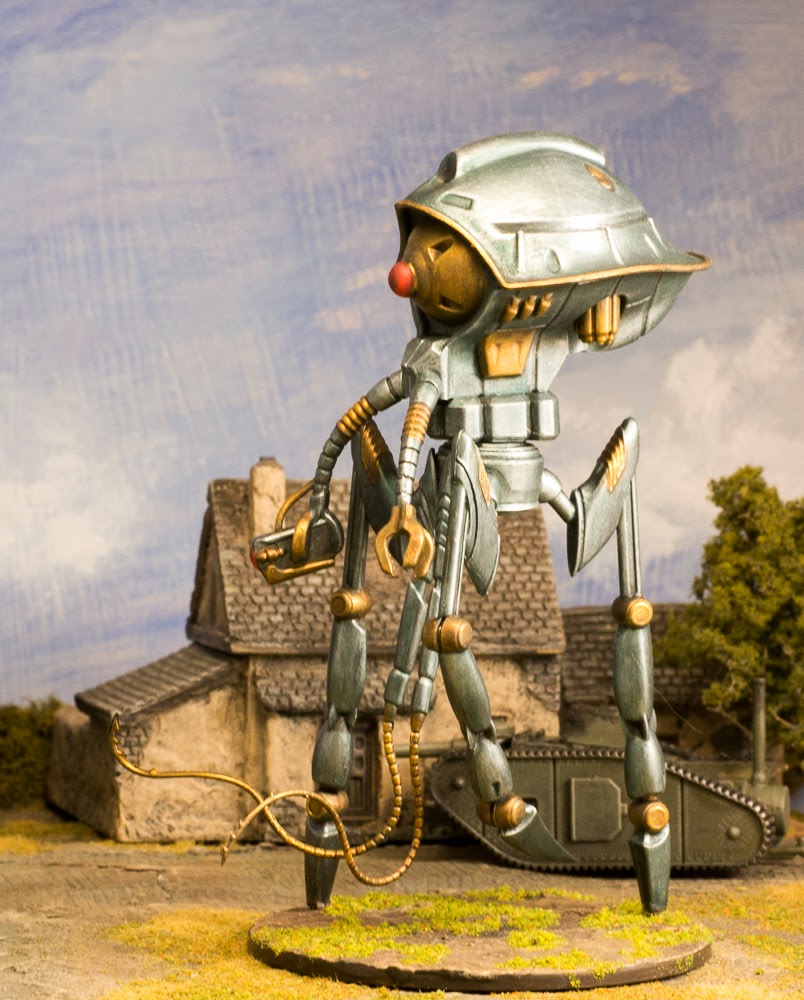 The kit went together very easily once I managed to track down some instructions for assembly. And painting was pretty quick for such a large model. I really like the size of the model compared to the 15mm infantry. He really towers over the human figures and gives a nice sense of implacable evil.

﻿ After posting him up for the Challenge earlier this week Curt raised an interesting criticism. He was of the opinion that the face has a sort of goofy look to them, even likening the noble Martian war machine to a clown's face with the eye as a big red nose. I have to say he has a point, and it comes across especially in pictures. Since I have two more to build I might try to recess the eye into the face plate instead.

﻿ It got me to think about other Martian designs I've seen before and I have to admit I like other more sinister versions much better than this one. One of my favorites is actually from the JLA cartoon and had a much more organic and asymmetrical look to the tripod. They even gave Superman a hard time for a while up until the end of the episode when they were destroyed by the handful. 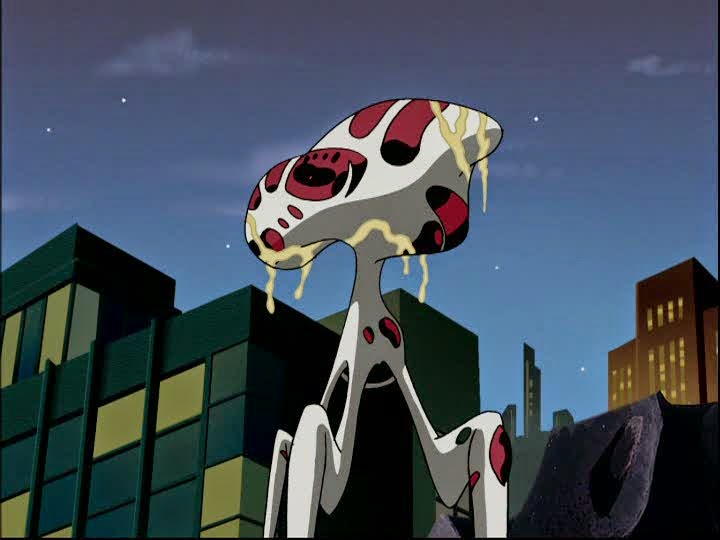 The other picture was pulled off of Wikipedia and I think this is more in the theme I wish they had gone for in All Quiet. Its much more menacing looking with a more organic styling to the machinery. Its not that I don't like the tripod as is, I do think it has a nice retro-futuristic style to it, but now all I can see is that damn clown nose. 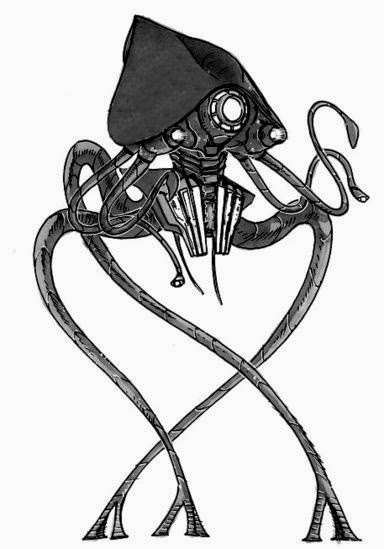