So it seems like the thing to do to go over what you accomplished in the year. Its been a bit of an up and down ride on the hobby front with a lot of my time taken up with getting married earlier in the year and also diving somewhat headfirst into a new hobby of bird watching. For the most part miniature stuff is a weekday evening activity for me as we sit around watching TVand unwind from work. But even so I'm happy with what I got done this year.
﻿

At the beginning of the year I set myself two real goals. The first was to paint up all of the figures I sculpted. This I actually accomplished although I initially intended to do so in comic book story fashion. Unfortunately, I just couldn't keep up with that as I kept cringing at my own horrible writing. A wordsmith I am not.


I also wanted to put together a bit of urban terrain for gaming. This sorta morphed into the Lower Fickleham project which is actually fairly well complete. Or at least all of the store bought houses are painted and I have a rather nice if not particularly English looking village.

All and all I'm happy with the year's production. I guess the next step is laying out some goals for 2014 but I'll save that for next time.

﻿
Happy New Year!
And Thank You to everyone that has taken the time to come by and had a look at my blog this past year! 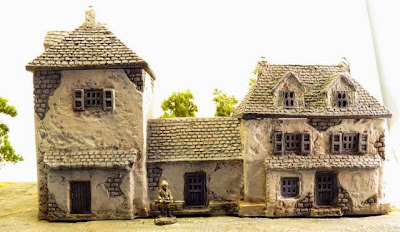 As the year comes to its end I've finally finished the last of the buildings for Lower Fickleham. Not to mean that I don't intend to continue to make new buildings for the town just that this is the last of the original Crescent Root buildings. Saving the best for last, or at least the largest, we have Worcote Hall. Probably some old manse of minor nobility. I imagine that he was the first one to plaster up all of those walls in the new Continental style and the rest of the town followed suit. Now everyone is sort of regretting the decision and the rendering is chipping away here and there. 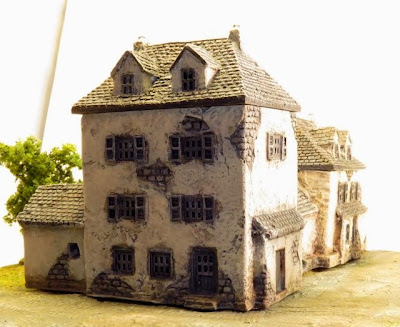 I followed the same paint scheme as the rest of the town but kept the building slightly cleaner. I left the windows dark as I really couldn't find any good examples of country homes with bright paint on them. I think it gives it a very somber appearance anyways. I also tried my hand at adding some ivy to the back. 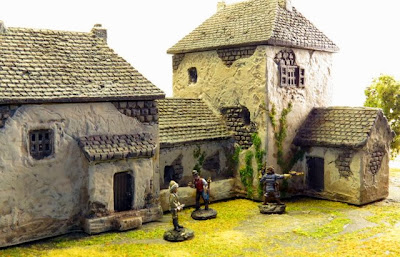 The Wyrm of Golgatha


I've always planned for the Cabal to be the shadowy evil organization of the Steamworks universe. I also have always liked the semi organic look of the Cryx warjacks and I knew that was what I wanted to use for the Cabal. One thing I like about the Cryx stuff in general is that most of them have a non typical body plan. This one is the Cankerworm and has a nice snake/centipede body. However, I wasn't too fond of the skull head. It just didn't work for me and made it look out of scale. Luckily, I also have a Leviathan kit  that will see service in the future and it comes with three head options. So one came off and the other went on.

It also had a weird claw at the end of its tail which rather reminded me of an earwig (One of the few insects I truly find revolting. I think it has something to do with the ear bugs from Wrath of Khan, a movie that I saw at perhaps too impressionable an age.) So a simple head swap and some tail surgery later and the Wyrm was born. 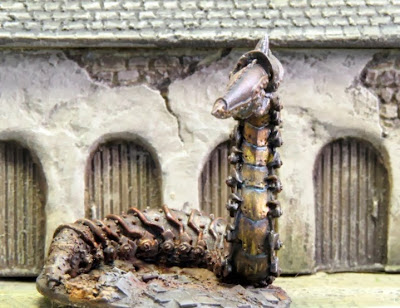 I tried to paint the the main body like an old cast iron frying pan. Maybe not the most fearsome thing but I like that rusty black metal look. Details were picked out in tarnished brass and I used green to accent the otherworldly power source.


I also wanted to try out some weathering powders on it. I recently ordered some secret weapon pigments and this was my first time using them. I slapped them on pretty liberally and thought perhaps I might have over done it. But after a coat of matte varnish they were toned down and blended in rather nicely. I'm thinking I might order a few more colors as they give a really nice effect. 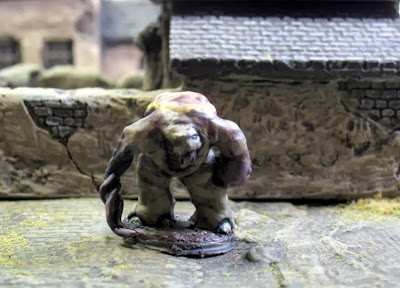 
I painted him up similar to the other one with a dull greenish skin tone but I also tried out using more washes and glazes to mottle out the coloration. While I'm happy with most of him the back just didn't turn out the way I wanted. I'm not entirely sure what I was thinking when I sculpted him but his back ended up looking like a dried shiitake mushroom. Not a very inspiring surface to paint. I tried to make it look like a honey mushroom cap but even after repainting it three times it still doesn't look the way I want. Oh well, in the future I'll have to remember to either make slightly more interesting features in the sculpting or to leave it more of a blank canvas. It really pays off at the painting stage. Sometimes when you don't have a clear concept of what your are going for it turns out a little muddled.


I have a couple more miniatures on the table so hopefully I'll be able to knock them out this month and get a couple more notches on the paintbrushes before the year ends.

Posted by Unknown at 8:57 PM No comments: