I still think that there is something about worshipping chaos that causes abnormal muscle growth. Even Tzeentch cultists that you would think spend most of their time reading spellbooks and cackling maniacally are built like professional athletes. Followers of Khorne are probably just slabs of muscle on top of other muscles! I guess only Papa Nurgle has no interest in the Chaos gym scene. 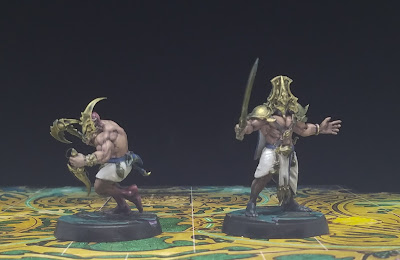 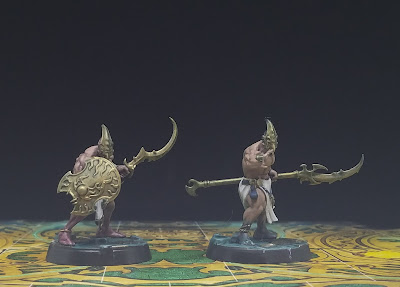 I finished up the second group of cultists. I did a simple shield swap with a Tzanagor's shield for the one but tried to differentiate them by basically inverting the colors from the last group. I copied the skin tone from the Dark Elf hero I did previously and went with white for the fancy loincloth/skirts/shorts things they're wearing.

With these done I'd say we're  about 3 quarters done with the set. I'm saving some of my favorites for the end but next up will be another familiar and then the Skaven assassin.
Posted by Unknown at 9:00 AM No comments: