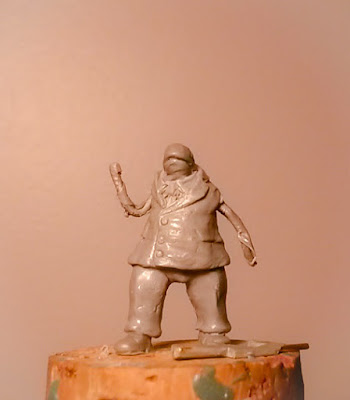 In an attempt to get into the swing of posting more regularly I've decided to try showing what I'm currently working on. Aside from the terrain boards I've also been trying to get back into the rhythm of sculpting again.

I am definitely a hobby butterfly and have a tendency to move from one project to another. Although I guess I'm rather like a Monarch in the fact that I tend to come back to the same projects again and again. The problem with sculpting is that  I'm far slower at sculpting than I am at finding new things I want to work on. This has led to starting many sculpts and then abandoning them as I lose interest and move onto something else. As a consequence I have a whole box of partially finished sculpts ranging from nearly done to barely started most of which I have no idea what I originally intended them you be. So I thought it might be a good exercise to try to make something of them. No real plans on what they will end up being just whatever strikes my fancy.

First out of the box was a rather pudgy fellow that was little more than a bulked out  armature. I was thinking maybe an alien merchant with robes like something out of Star Wars but then my wife said " Give him a fishhead!" and later "How about a gangster suit." And so Jimmy Fishhead, mob enforcer was born.

Here he is to start. To give you an idea how long he was sitting around I switched from using greenstuff to Procreate to sculpt with about 6 years ago. The head went on first with a pair of generic dress shoes. 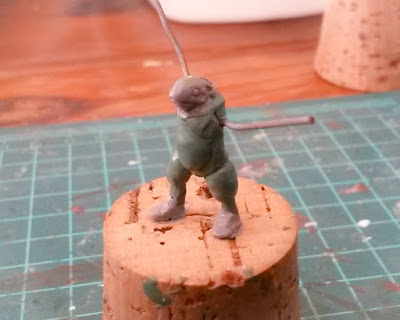 Here is where he is right now mostly suited up. I wanted to do a classic double breasted suit but misplaced my first button. Oh well Jimmy likes the freedom of movement with a single breasted jacket. 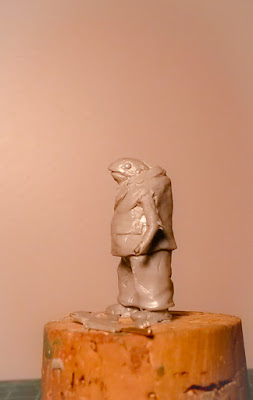 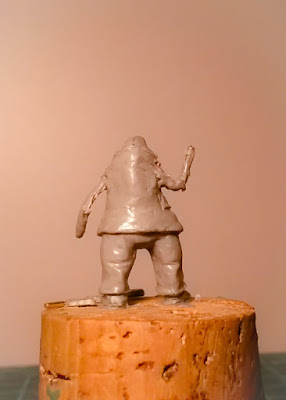 I'm also working on a tommy gun for him. I find doing hard surfaces like this difficult so I'm taking my time with it. Hopefully Jimmy will be done and off the work bench by next week. Then it will be onto the next draw from the box of orphaned sculpts. 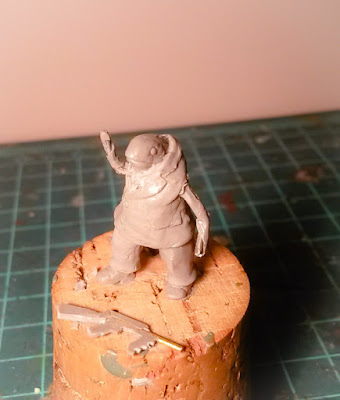 Email ThisBlogThis!Share to TwitterShare to FacebookShare to Pinterest
Labels: 28mm, On the Workbench, Sculpting 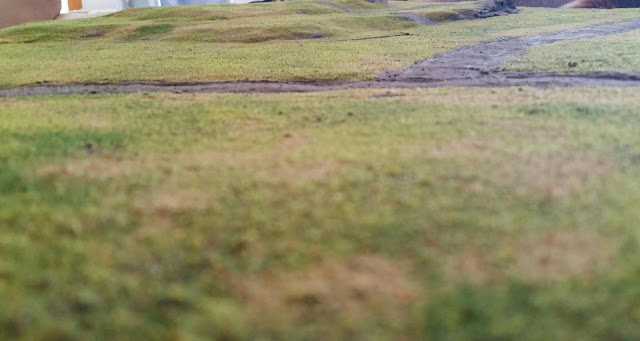 Finally the saga of the terrain boards comes to completion. I've been taking the opportunity to work bit by bit on them over the past couple of months. I started these quite sometime ago and then tried to get them complete in a four day rush last November. If you want to take a moment to look back you can follow this link to see the previous posts. Modular Boards

After the last coat of thinned down wood filler as a seal coat I also added some patches of other texture. This was done with a combination of scrubbing on some straight wood filler and using pumice gel I had lying around. ( I bought the pumice originally for basing miniatures but it didn't quite work the way I would have liked so it's getting used up here.)

Next up was painting. I actually pulled out some of my previous completed terrain pieces that would go with them to make sure things would match up.This is probably more important with the flocking later on though. The wood sides just got a straight coat of black gesso. As much as I would of liked to stain them I had to grind through several layers of the plywood to make the sides straighter and I expect the finish would have been awful. 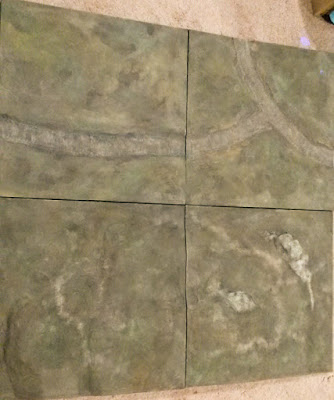 Last part was putting on the flocking. I used a first pass of mixed colors of flocking. I learned as I went along so the flocking on the first board with the crossroads is a bit rougher than the last. I decided to keep the flocking sparse in areas so that the painted parts show through underneath. If it turns out I don't like the effect once I start using them I figure I can always put another coat on. 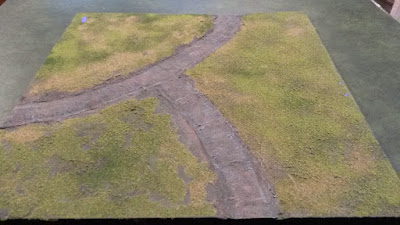 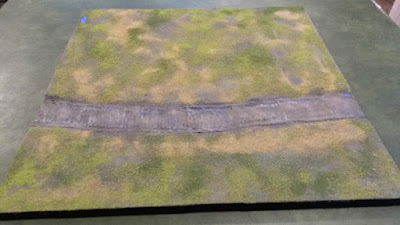 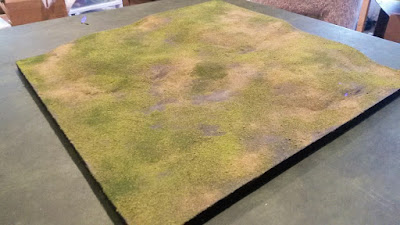 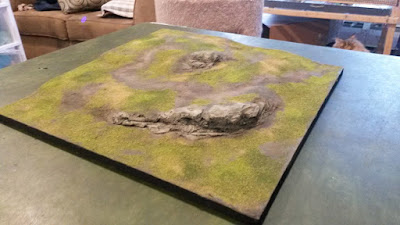 All of the pictures were taken quickly with my cell phone. Unfortunately the boards don't fit in my lightbox so the pictures aren't the best. I'm hoping that I can take some better pictures soon with better natural light and with some of my terrain and figures on them.