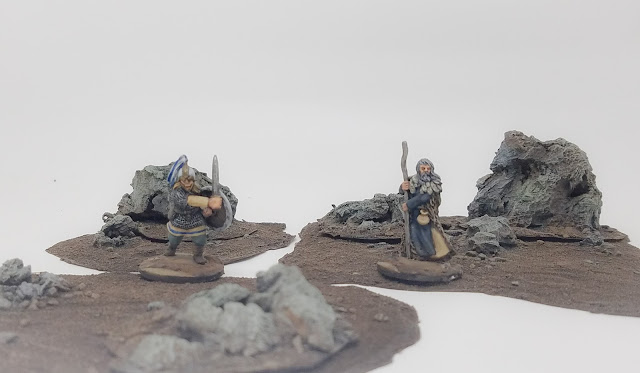 These pieces are my first experiments with making a set of modular, flexible terrain pieces. The idea is to have terrain bases with magnets embedded in them. These bases are kept relatively simple and can be used as areas of rough terrain or just to visually break things up on the board.

Separately I'm making smaller pieces again with embedded magnets that can be put on top of these bases. These pieces will have more specific terrain pieces such as trees, rocks, brush etc. Combining the two will let me have woods, rocky areas, brush or whatever. The smaller pieces could also be used by themselves alongside the bigger ones.

I'm also experimenting with using cork bark for my rocks. Normally I like to carve rocks out of styrofoam but having seen people use cork to good effect I thought I'd give it a try. It's a little harder to get free standing rock formations to look the way I want but I figure the inherent texture will make them much easier to look like sedimentary stone.

Painting was pretty straight forward to keep with the style of the rest of terrain and most importantly the mat.

In the second part I'll add all of the flock and vegetation that will really bring the pieces together. I'm still collecting everything I want to use for this stage. The plan is to take my flocking up a step from what I normally do and add a bit more character to the pieces.