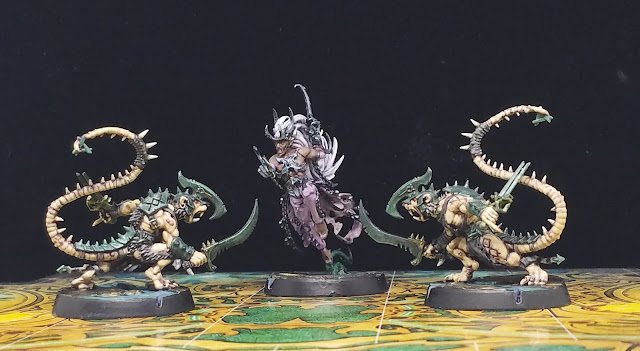 My wife and I actually got to play a demo of Silver Tower at our Local Friendly Game Store about a month ago. We both really enjoyed playing. I really liked the basic mechanic for the heroes of rolling a dicepool at the beginning of your turn. You use these to perform different actions. The more powerful actions like a big attack require you to spend a better die result. I was playing the dark elf and he could make his basic attack by spending any die (1 or better) but his big stabby attack needed a 4+ and for his crazy teleport move of doom you needed a die with a 6. You lose dice from your pool if you're hurt meaning you can do less actions but there is also a Fate pool that everybody can take dice out of to use as well. I thought it was a really nice system that was unique to me but very clever and fun. 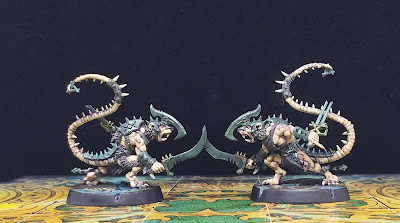 After playing I started working on the next two figures from the set: the Skaven assassin. They actually represent only one guy and his magical duplicate that he projects in the game. So I painted them exactly the same. 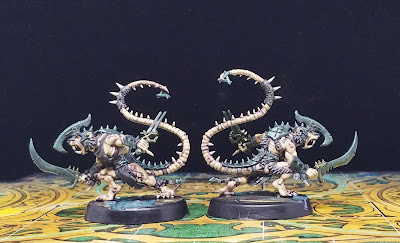 I'll admit I kind of ran out of steam about 80% done and he just kinda languished on the paint table pitifully staring at me with unpainted eyes for weeks.  This weekend I jumped in and finished him off. I kinda rushed the final details but he's done and at this point I'm counting it as a win. 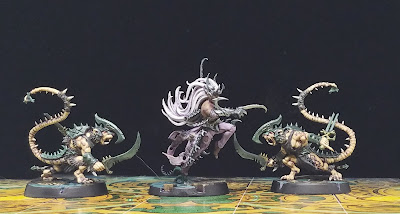 I'm going to put Silver Tower aside for a while as a it looks like I might be playing some games of Team Yankee this summer. I'm going to paint up a force of British to join the NATO forces and hopefully get a chance to bring my airbrush out of storage. I also wanna get back to playing around with some terrain again so that will probably be next.
Posted by Unknown at 9:00 AM