All Quiet on the Hobby Front

Another big gap between posts but I do have somethings in the works moving forward. 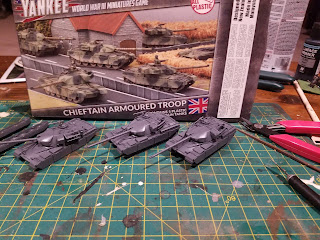 First up my shipment of Chieftan MBTs came in and this week I've been slowly assembling the 2 troops. Hopefully they'll see some paint in the next couple of weeks.


Second the drums of war from the Grimdark future have brought me back to 40k once again. I purchased the new Dark Imperium box after following along with GW's lead up to releasing 8th edition. Having read through the rules I'm pretty impressed but I still need to try playing a game to make a final determination. I'm really looking forward to getting some paint on the new figures.


The return of 40k has seen me returning to my Red Planet terrain project that stalled about this time last year. I didn't like the way they were turning out then and put everything on hold for a rethink. I'm scrapping my overly ambitious original plan and going with tried and true plastic plants instead.


That's looking forward on the hobby end of things. I haven't been idle in the past months but I've found more of my time taken up with non-miniature gaming pursuits. A big part of it was helping my we ife stock up on inventory for some upcoming shows for her side business of needle felted birds. We've also started looking into expanding out into the wooly world of amigurumi crochet. I never really felt these side projects belonged on this blog but at the same time I do enjoy posting something about them so I decided to create an Instagram account to act as a miniblog/project log for these non miniature related projects. I expect the occasional miniature stuff will make it on there too. I want to update the look of this blog soon and I'll add a permanent link then but until then if you want to check it out follow along here.